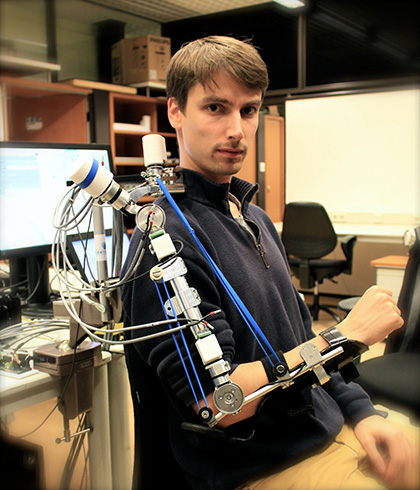 The work that Joan carried out during his PhD was part of the Flextension project, which had as a goal the development of a wearable arm exoskeleton for people with muscular weakness, in particular for people with Duchenne muscular dystrophy. The role of Joan in the project and the topic of his PhD was the development of intuitive and natural interfaces to control the exoskeleton. He investigated the feasibility of control interfaces that used surface electromyography and force signals to detect the motion intention of people with Duchenne. His studies show that adults with Duchenne that lost their arm function several years ago could voluntarily control the movements of their arms again and perform functional movements with the assistance of the robotic arm support.

Since April 2016 he is working at Focal Meditech (Tilburg, The Netherlands) in the department of Research and Development. His work at Focal Meditech deals with the development of force-based control interfaces for robotic arm supports. After his work at Focal Meditech, thanks to a Balsells grant, he will work as a Postdoctoral Researcher at the Biorobotics Lab (UCI, Irvine, California, USA) with Prof. David J. Reinkensmeyer. There, he will be developing a robotic device that assists people with stroke in manual wheelchair propulsion.