The Biomechanical Engineering Lab assisted to the 8th ECCOMAS Thematic Conference on Multibody Dynamics held in Prague (Czech Republic) from 19th to 22nd June 2017, and to the 23rd Congress of the European Society of Biomechanics (ESB) in Seville (Spain), from the 2nd to the 5th of July 2017.

The ECCOMAS Thematic Conference on Multibody Dynamics is an international meeting, focused on all aspects of multibody dynamics, held once every two years in a European country. This year it was hold in the Faculty of Mechanical Engineering in Prague, Czech Republic.

The Biomechanical Engineering Lab presented two papers in this Conference. On Tuesday 20th, Albert Peiret presented a paper in the second Session of Contact Dynamics and Constraints, about the Generalized Friction Cone for Multibody Systems. 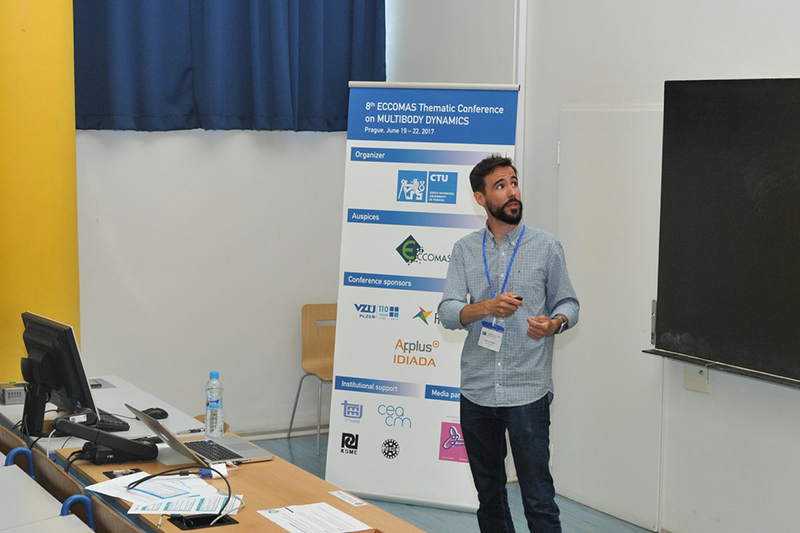 On Thursday 22nd, Míriam Febrer presented a paper in the sixth Session of Biomechanics, about an optimal control framework using OpenSim biomechanical models and GPOPS-II, to predict a dynamically consistent walking motion for an SCI subject assisted by orthoses, as the designed by the group. 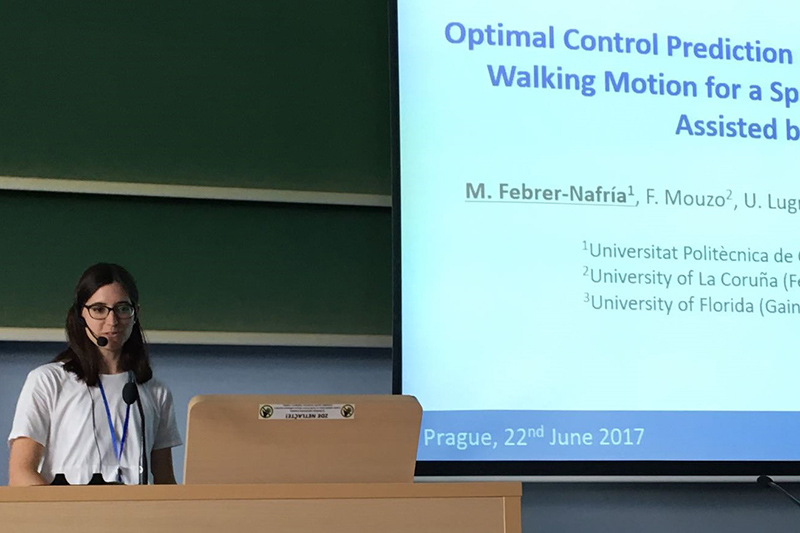 Throughout the conference four Plenary Talks were scheduled, all of them very interesting: Jorge Ambrósio (Technical University of Lisbon, Portugal) talked about current problems and challenges in Multibody Dynamics, Andreas Müller (Johannes Kepler University Linz, Austria) presented current control approaches to Robotics, Peter Eberhard (University of Stuttgart, Germany) showed some results of simulation and analysis of the dynamical-optical sensitivity of telescopes by means of Flexible Multibody Systems, and Andreas Pott (University of Stuttgart, Germany) introduced to us different issues about cable-driven parallel robots. 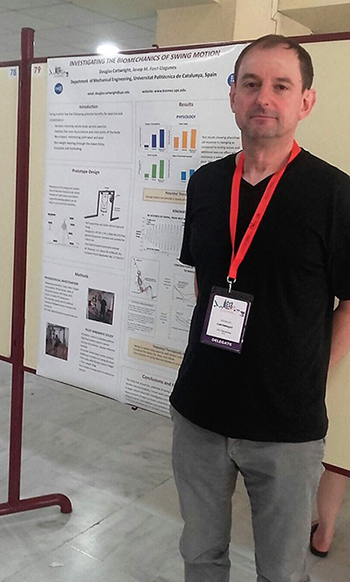 The Biomechanical Engineering Lab presented a poster and a paper, and also chaired a session. On Monday 3rd in the morning, Míriam Febrer co-chaired the “Human Movement” Session with Markus Heller (University of Southampton, United Kingdom). Within this session, Míriam presented new results of the study in collaboration with Sant Joan de Déu Hospital about gait kinematics and symmetry in patients with hemiparesis using an audio feedback device. In the afternoon, Douglas Cartwright presented his poster about the biomechanics of swing motion in a “Flash presentation” session, and exposed it in the space provided for the posters.

An interesting Plenary talk was the one given by Walter Herzog, from the Calgary University, Canada, about a new paradigm for muscle contraction. There were also 13 Perspective talks, among them we want to emphasize the one presented by Maxime Raison (Polytechnic Montreal, Canada) about if the assistive exoskeletons of the future will be biomimetic.

Moreover, there was a Best Doctoral Thesis in Biomechanics Award. Lorenzo Grassi (Lund University, Sweden) won it, and he presented his thesis, entitled “Femoral strength prediction using finite element models: validation of models based on CT and reconstructed DXA against full-field measurements”.